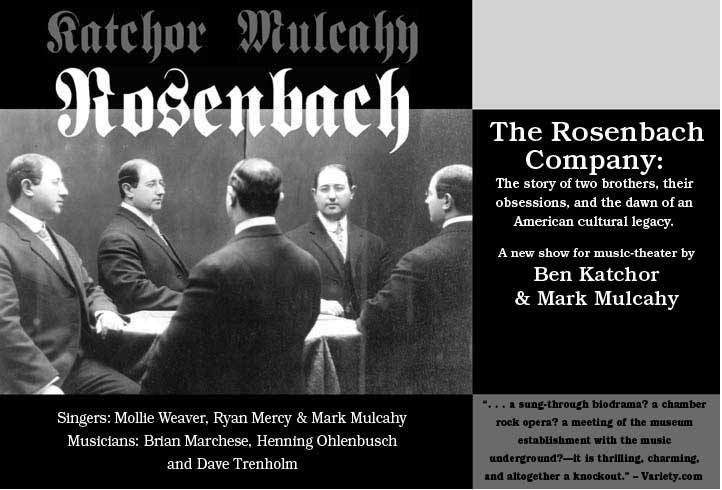 Katchor and Mulcahy's new sung-through pop-musical chronicles the life and times of Abe Rosenbach, the world's preeminent rare-book dealer in the first half of the last century and his brother Philip, a savvy dealer of decorative arts. Their collection ranges from James Joyce's manuscript of Ulysses to John Tenniel's original illustrations for Alice in Wonderland

Mixing projected animated images with live actors, singers and musicians, the show explores such issues as the obsessive nature of collecting, the relationship between cultural and commercial pursuits and the men's historical significance as the owners of some of the world's greatest literary treasures.

In 2004, Katchor and Mulcahy premiered their first collaboration, The Slug Bearers of Kayrol Island, at the Kitchen in New York City.

Ben Katchor (projections, text and direction) is best known for his comic-strip series Julius Knipl, Real Estate Photographer, The Cardboard Valise, Hotel & Farm and The Jew of New York. He produces a monthly strip for Metropolis Magazine and his drawings appear in The New Yorker. He is the recipient of a Guggenheim Foundation Fellowship and a MacArthur Foundation Fellowship. He is currently a fellow at the Cullman Center for Writers and Scholars at the New York Public Library.

Mark Mulcahy (composer and singer in the roles of Abe Rosenbach) has released three critically acclaimed albums (Fathering, Smilesunset and In Pursuit of Your Happiness) and performs in the USA and Europe. Mr. Mulcahy also composed the music for the television series The Adventures of Pete & Pete with his fictional tv band, Polaris. He has written music for the films Spring Forward, The Crush, and A Matter of Degrees. Mr. Mulcahy is featured in the new Nick Hornby collection, Songbook.

This production was originally produced and commissioned by The Rosenbach Museum & Library for its 50 th anniversary celebration and as part of the Rosenbach's artist-in-residence program in September 2004.

This project has been generously supported by a grant from the Philadelphia Exhibitions Initiative, a program funded by the Pew Charitable Trusts, and administered by The University of the Arts, Philadelphia.